The month began simply enough, with me heading West to TN, to install a simple 60-ft tower & beam for N1NDM.

But (and there are almost always “buts” with these ham jobs)…the pictures Tom had sent along didn’t show the smallness of his lot. Anyway, he had also purchased new (at least it hadn’t been installed) tower sections, but they were American sections, which are not configured like 25G, although they are the same dimensionally. Makes climbing them a real annoyance, because muscle memory fails–the Z-bracing is different. Compound that with the new F-12 6BA Yagi, still under-going construction, and I was there a bit longer than anticipated. Things were made even more interesting when we discovered some missing hardware. Luckily, I carry a good selection of SS stuff, and I was able to procure the rest at a local big box store.

Decided to remove two guy sets once the tower was built and simply lift the beam straight up the tower. That worked but then we were faced with a little mast issue–the 10-ft I had brought along was not long enough (since the accessory shelf can only go at a section joint) 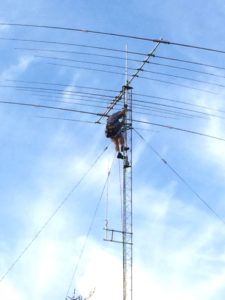 ! Well, worked through all those issues and got everything installed, save mounting the NEMA box containing PolyPhasers, etc. on the wall of the house. But Tom had a local guy who could drill an access hole for the cables and do that.

So I was literally wrapping things up when I got a phone call from Ohio, telling me my Mother had been admitted to the hospital, in serious condition, with numerous problems.  After a mad dash home, I headed to Ohio. And her condition was serious–so much so that we moved her to a hospice care facility the next day.  I’d grown up on a farm and thought I’d figured out the necessary reactions and conditions for dealing with death, but the huge sweeping emotional waves caught me by surprise. She passed away July 11th, and then began the necessary arrangements, so to speak, which we thought we’d covered way back in 2003, when my Father died. Mostly we were right, but dealing with some of the local utility companies was a bit taxing. As is/was writing an obit for your parent. I remember that was the very first assignment in J-school, yet the words have way more weight to them when it’s your own Mom.

In any case, lost over a week, so the schedule is more-or-less trashed from what it was last month. Playing catch up and trying to get back on track as soon as possible.