Having switched from working on a first-come, first-served basis (due to not having a helper–ground crew or second climber–with me), to a more geo-centric basis, I recently traveled to mid-MO for three clients: WX8C in New Florence, AI0O in Ashland, and the University of MO at Rolla.

The installation at WX8C was the most involved as well as the most interesting. It involved putting up 90-ft of AN Wireless tower along with the installation of an Opti-Beam OB-17 and a separate 6M beam up top. I originally installed the tower and beam for N3KS in MD years ago, then W2GD took it down, then I picked it up and hauled it out to MO for Harry, WX8C, along with the Opti-Beam. This all involved a lot of planning!

Harry and his brother-in-law Jeff put the tower together. Then we contracted Hillebrand Crane Service to put it up, along with the antennas. Again, with some considerable planning and lots of tailgate meeting time, everything went off without a hitch. Terry Hillebrand was excellent to work with–listening to my directions and taking his time moving everything around aloft. Very nice to work with, indeed.

I used the “flying forklift” approach, as I’ve done dozens of time–securing some 2X6s to the man-basket to set the antenna on & then going up to secure it on the mast. It’s not only secure and easy, it’s much faster than trying to stand ON the tower (where you simply do not have as much available strength) and muscling things into position. 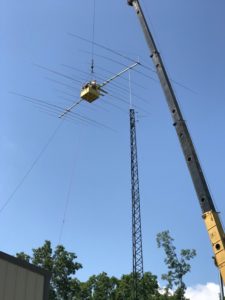