Yes, it’s been a while since there have been any blog posts.  Mostly, I suppose, because I’ve been either too distracted, too busy, too lazy, or too whatever appropriate adjective you can come up with on your own to describe my lack of posting.

I have a crazy collection of jobs in the queue. I’ve been plagued by a shortness of breath problem of late, too, which has been getting progressively worse. So much so that I’ve seen numerous doctors & had numerous tests, mostly all to no avail. Hoping to get a handle on this issue before much longer.

In the meantime, & the focus of this post, is a brief summary of the most recent work at the US Military Academy, in West Point, NY. An RFQ (request for quote) came my way in late 2017. I learned it had gone to five ham radio “tower guys,” all told. The RFQ was 53 pages long. It had some “interesting” errors–technical glitches, let’s say–& was obviously heavily laden with mil-speak language. I was, perhaps foolishly, the only one to respond, so needless to say, I was awarded the work. It required jumping (sometimes it felt more like crawling, really) through several hurdles, such as paying over $15,000 for NY State Workman’s Compensation Insurance! Yep, cash on the barrel-head before being allowed on post.  Of course that alone required rewriting the entire RFQ to ensure I got that back, etc. Then there were the error fixes (which required detailed explanations), & then a site survey visit in August 2018. Of course, that visit proved that all new personnel were then involved–the original draft writer had been transferred, etc. In any case,  KI4TZ & I headed to West Point in May.

The work entailed building a JK Antenna mid-Tri-40 Yagi & an M2 satellite array. The Yagi would go on a couple sections of 45G on the roof of a four story building, to be mounted inside an HVAC enclosure. The satellite array would go on a non-penetrating roof mount (NPRM) on the next rooftop over, & would include the very heavy duty M2 AZ-EL mount rotators.  This all sounds easy enough, if you have any tower experience at all, but each install would be hampered by a myriad of “issues,” let’s say.

The original survey concluded with the idea we’d install the Yagi & tower using a crane. And while I agreed with that in August, not having a big enough tape measure at hand then proved to be a fatal mistake. There was no way a crane would work. Nor would the proposed helicopter lift (although I was big on the idea!).  As a mere sub-contractor (not being an approved gov’t contractor), the contractor’s safety officer nixed that idea at once, although the helo guy at the Point was quite eager….

We began by building the Yagi. This was made somewhat difficult by the boom being longer than space available on the rooftop. Basically, we ended up having four elements hanging out in space, which required some serious juggling to ensure they were not only straight but level, etc. And then, of course, once the Yagi was assembled, there was no further workspace to build the satellite array. So….we trammed the beam up on to the tower. From rooftop to rooftop sounds quite easy in theory, but we had only 22 feet for the tram. (Typically, one has twice the tower height for tramming…) 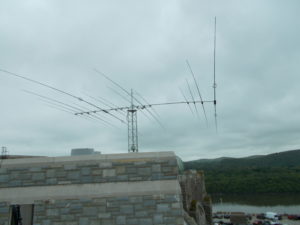 But we managed it.  Then Joe began working on the satellite array while I finished up the tower & Yagi. 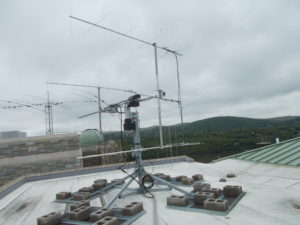 I should have mentioned before this that we were closely watched by two “inspectors,” one for the real contractor & another for the Army Corps of Engineers, who were of course over-seeing the project, as they do for any/all such work.  Neither one had ever seen a ham radio, tower, antenna or any associated hardware before.  So that lead to a few frustrating questions, made even more so by their standing within what’s called one’s “personal space” for much of the time.

I should have mentioned that the weather in West Point was not the best, either.  Indeed, it rained 10 of the 12 days we were on site.

But we persevered & finally finished. The cadets seemed happy, the club advisor seemed happy & we certainly were happy to be on our way home at long last.